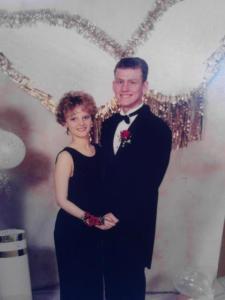 The year was 1996 and the hit song “Angel Eyes” by Jeff Healey won the theme for Prom 1996.
I am just glad it wasn’t something like “Under the Sea.”
But anyways, Seth and I had only been dating for about four months when THE senior moment was about to take place – PROM.
The first time I went to prom, I was a junior. I decided a week before the event to go with my friends and well, I blew off work too. (Note to all seniors going to prom NOW – ask for the day and day after OFF from work because there is a chance that your BOSS may actually be at the prom, such as the case was with me back in 1995 and then I was “written up” for lying. How they actually knew I didn’t have a cold, I will never knew, but whatever – that was my “bad girl” moment in 1995.) Anyways, that year, I wore a white dress that reminded me more of a First Communion gown than a formal prom dress. That’s probably why I was never asked too – lame dress.
OK, flash forward a year – a I had a date and a hot fitted slinky black dress that I LOVED. I mean, LOVED. I think I loved this dress more than my wedding dress. The dress was under $100 – I know this because that was my spending limit – yes, folks, it’s called a BUDGET.
But, now, let’s move ahead to the year 2013. I recently read an article that stated today’s “average prom” is running parents $1,139.
I don’t think our prom committee budget for our entire senior class was $1,139.
Can you imagine? That is more than my wedding dress!
But then the “sources” began explaining WHY prom is costing an arm (tanned) and leg (also tanned) … you have THE DRESS; the pre-prom hair try-out; pre-prom makeup; day-of-the-prom makeup; the day-of-prom hair; mani/pedi; visits to a tanning bed; tickets; tux; dinner; and limo (hahahaha, right!)
I have no idea how much it actually cost to attend prom in 1996; but I know damn well it did not cost $1,139.
Today’s prom trends are going to send me into a tizzy eight (for Ethan) and 13 years (twins – maybe KK and Derek can just go together their senior year?) from now.
Therefore, I have started a “SEND THE LINEBRINK KIDS TO PROM” FUND. If you’d like to donate, I accept cash, coins and checks. I promise, I will send you a photo of the kids with their dates that you helped fund.

View all posts by communicationslinebyline