To say it’s been a crappy few hours being a Linebrink is the understatement of the year. 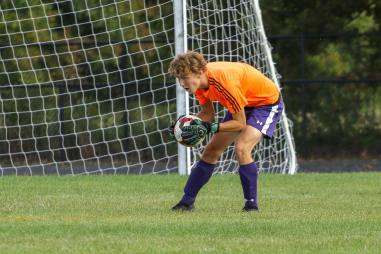 But, I will say this … if there was ever a sign from God, today was the day where he pretty much said, “You all need to calm down.” (Kinda like the Taylor Swift song, only not as catchy.)

Earlier in the day, our 16-year-old high school soccer goalie took a beating in the goal box.

We’re not sure exactly what happened, but we do know that one kid should have been taken out of the soccer match way before he collided with our kid. But, our kid, being the goalie, was protecting the box, the ball, and ultimately, the team. The opposing player probably should have been removed the first four times he clobbered into our players, but that point is moot now. It’s moot because our son let his emotions get the best of him, retaliated and received a RED card during the match.

For those of you who have no children playing soccer (I envy you), a RED card is BAD. It means he had to sit out the rest of today’s game, and the next two soccer games too.

No one in our family was happy with the call, but it is what it is. However, it was the second time this season he was protecting the box and got reprimanded.

At the end of the soccer match, I was contemplating anger management sessions for our teenager.

He was angry at the world. And, he let me know it.

But then within a matter of 15 minutes his world changed forever.

He was stopped at a stop-sign in town, waiting his turn, when a man on a black crotch-rocket sped out of our local gas station, lost control of his bike, and slammed into my son’s car. It happened so fast, my son didn’t have time to react. A fellow teammate witnessed the entire incident and stopped to make sure my son was okay. Both of them explained the man on the bike lost control, then knowing he would hit my son, let go of the bike and allowed for the bike to crash into the car while the man on the bike skidded on the roadway in the opposite direction.

What happened next shocked the hell out of my son and his teammate.

The man on the bike hobbled to his now damaged bike, started walking with it toward a local pub where my son yelled at him to wait and they’d help him. While the two young boys figured out their next move, the man got back on his bike and bolted like a bat out of hell toward the eastern part of Lorain County.

This man is most likely injured and probably has a severe case of road-rash on his body. My son walked away from the accident shaken by what happened, but otherwise, just fine.

It’s amazing how one minute our entire family was so focused on a soccer game and how in a split-second were wrapping our arms around him, hugging and kissing him, not wanting to let go.

Talk about putting our lives in perspective.

Soccer is just a sport; and yes, our son cannot play for two games, BUT he is alive.

Maybe it’s time for everyone to calm down.

View all posts by communicationslinebyline